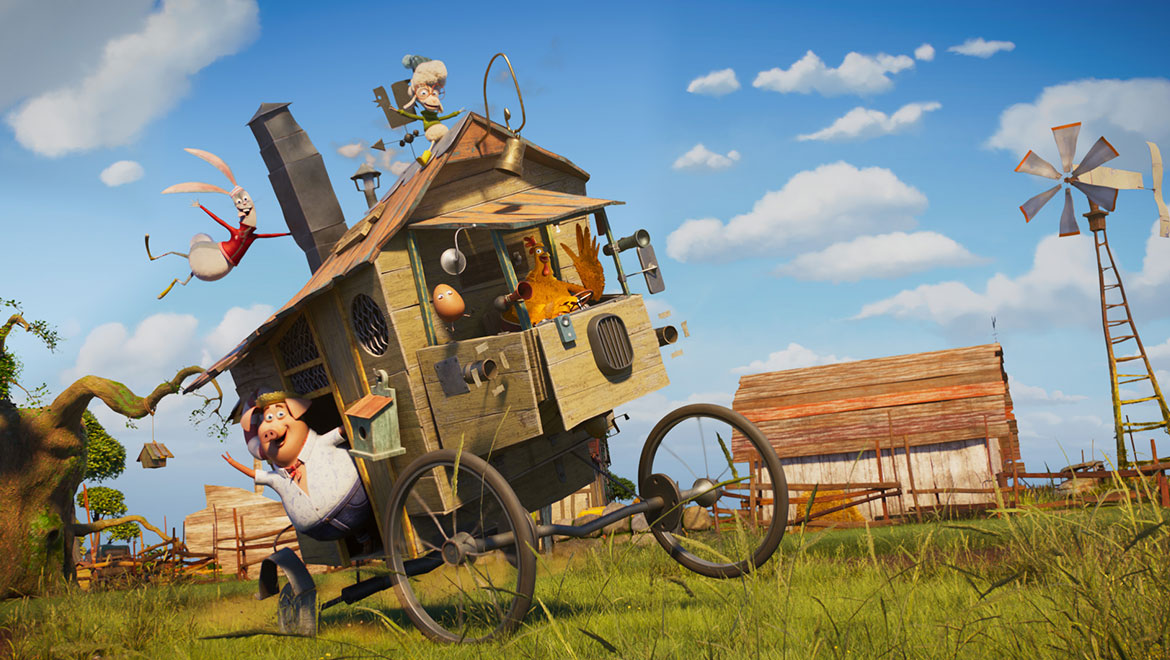 A co-production with Mikros Animation IP (formerly Technicolor Animation Productions) along with France télévisions in France and Tencent Video in China, The Coop Troop was co-created by Colin Williams of Sixteen South and the children’s author and illustrator Alex T. Smith.  The series is set to debut on France télévisions and Tencent Video in 2023 and has been produced in Northern Ireland and France.

When their red telephone rings, somebody needs help, so the Troop set off in their ingeniously – if haphazardly – modified chicken Coop to provide it. No matter how simple the problem, The Coop Troop will always come up with a way to solve it – usually in the most roundabout, over-the-top way possible, resulting in an escalating comedy of ridiculous events as each mission snowballs out of control. As they frantically try to get things back on track they attract more chaos at every turn – but with The Coop Troop, satisfaction is always (eventually) guaranteed!

Colin Williams, Creative Director at Sixteen South said: “We can’t wait to introduce the audience at Annecy to our motley group of furry, feathery and woolly rescuers. The Coop Troop is our retro homage to classic TV series of the 70s and 80s like The A-Team and we are very excited to hear what viewers make of it.”

Sandrine Nguyen, SVP, Episodic, and IP at Mikros Animation IP, said: “We’ve had great fun collaborating with Sixteen South and Tencent on this wildly funny and appealing series. Our bunch of heroes shows how you can solve any problem with friendship and teamwork, which is a great message for today’s kids and one that we hope will resonate across the world.”

Pierre Siracusa, Director, Animation, Youth and Education, said: “France télévisions is proud to introduce this wild bunch to the Annecy audience. We hope that viewers will enjoy their positive attitude, crazy humour, and ridiculous exploits as much as our audience of six- to nine-year-old girls and boys is going to!”

Selina She, Director of Kids’ IP Development & Programming Center at Tencent Video said: “International co-production is an important part of Tencent Video’s strategy on kids originals and we are thrilled with the results of our partnership with Sixteen South. The Coop Troop will not only hugely entertain our audience, but also show how with friendship and teamwork you can solve any problem. We can’t wait to introduce it to the world at Annecy.”

About Sixteen South
An EMMY® nominated and BAFTA winning studio, Sixteen South is passionate about creating quality television for children across the globe and was the BAFTA Children’s Independent Production Company of the Year in 2017. Their shows include Lily’s Driftwood Bay, which has been sold into 130 territories; Pajanimals, produced in partnership with The Jim Henson Company; Big & Small, a co-production with Kindle Entertainment; Sesame Tree, a partnership with Sesame Workshop; their IFTA and BAFTA winning Big City Park; Claude; Wildwoods; Pinkalicious; and Odo.

About Mikros Animation
Mikros Animation is a global CGI animation studio offering front and backend services that bring stories to life. By uniting industry-leading artistry with our global infrastructure of creative studios, we help filmmakers define and develop their vision from script up to screen to make every project a unique one. In less than ten years, Mikros Animation has contributed to ten released feature animations and to numerous high-quality episodic shows for the world’s best-known animation studios, either as creative studio, line producer or executive producer. Mikros Animation has also produced more than 300 hours of programming, broadcast by notable channels including Cartoon Network, Nickelodeon, TF1, France TV, Gulli, M6, Gloob, and Super RTL. Our episodic content airs and streams globally, in over 180 countries.