MPC studios create an epic series of digital clones for the launch in third collaboration with Balenciaga. 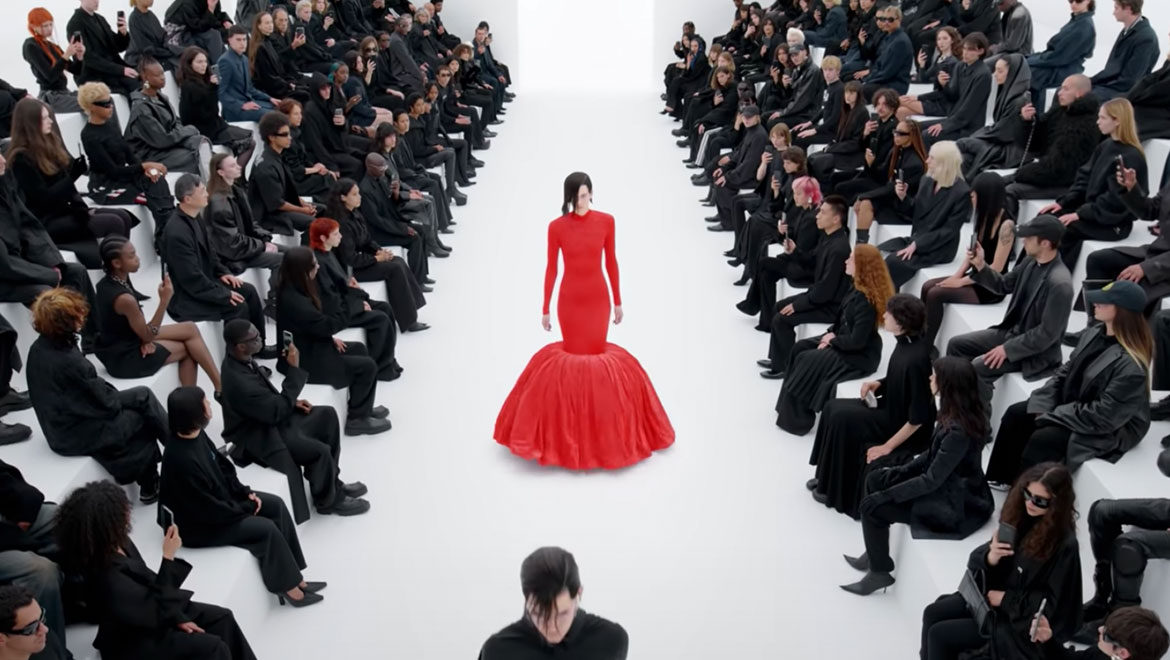 Balenciaga creative director Demna Gvasalia presented Moving Picture Company (MPC) with a unique creative challenge: how to ‘clone’ artist Eliza Douglas so that she was wearing every look for their Spring 22 launch.

This project marks Technicolor MPC’s third collaboration with Balenciaga following a Summer 21 Pre-collection video directed by Walter Stern, and a Winter 20 collection video for the brand’s Paris Fashion Week show. For MPC, it was another opportunity to collaborate directly with the client from the very beginning of the process.

“In Pre-production, we were able to plan together the whole show,” explained Dryden. “The team at Mikros MPC used a game engine to previsualize which looks could be body doubles versus which ones needed to be the real Eliza. The pre-viz also defined the scale of the set for the art department and allowed production to choose the best lens, angles and positions needed to run multiple cameras in sync whilst on location.”

During the shoot, a team of on-set supervisors from the London and Paris studios captured photogrammetry of Douglas’ face and oversaw a variety of in-situ plates to extract her face and transpose it onto body doubles shot on the catwalk.

Elaborating on this process, Dryden said: “We also used a CG scan of Eliza’s head and on-set photo references to build a proxy Eliza head, to help visualize the face replacements. This allowed our compositing team to study and analyze each shot, each face, to define the best process to achieve the highest-quality clone.”

The team then applied the best technique to create the face replacements, including Planar Tracking, Roto Animation, Keen Tools (3D tracking and modelling tool inside Nuke), and Machine Learning (AI/deepfake).

“Once we began attaching Eliza’s faces, we matched light, textures and motion artifacts using compositing. Using the references and the scan of the head, we made sure each clone’s face was as pixel-accurate to Eliza’s face as possible while still retaining the nuance of the specific Balenciaga design aesthetic,” concluded Dryden.

The final nearly seven-minute long film shows all of the ‘clones’ with Eliza’s photogrammetry-captured and CG-scanned face as they march down a minimalist runway to a sci-fi-inspired soundtrack composed by BFRND, with an AI voice narrating the lyrics of ‘La Vie en Rose.’

“Balenciaga’s SS2022 show was an exciting project on so many levels,” says Fabrice Damolini, Executive Producer at Mikros MPC. “Mikros MPC has been working for a long time on face replacement and digital doubles projects. Building upon our experience from the world-acclaimed ‘Egéries’ for Dior and the multiple feature film projects where the technology has been applied, we have brought together artists and experts from our worldwide network of studios to bring Demna Gvasalia’s creative vision to life. It was a fantastic challenge from both a creative and technology standpoint and is the result of superb teamwork across our London, Paris and Bangalore studios.”

Read the story and full list of team credits behind the latest collaboration with Balenciaga and MPC.