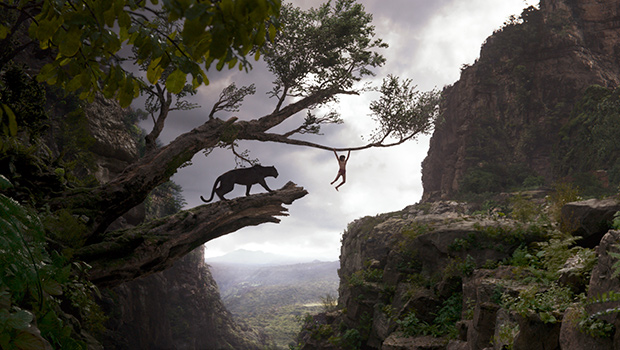 Todd McCarthy, veteran film critic and historian, in his review of director Jon Favreau’s new, stunning adaptation of Rudyard Kipling’s The Jungle Book declared, “…the visual effects team led by Robert Legato and (MPC’s) Adam Valdez has both created sumptuous settings that look as lifelike as any CGI ever presented in a studio feature and integrated both humans and animal characters in them in seamless ways.”

To achieve this cinematic marvel, Favreau, working with cinematographer Bill Pope, ASC, production-side visual effects supervisor Rob Legato, and many others, led an effort that was acknowledged by Disney Studio’s President of Theatrical Productions, Sean Bailey that resulted in “one of the most technologically advanced movies ever made.”  Legato spearheaded the “virtual production” pipeline employed by the production, based on his previous work on The Aviator and Avatar.

Technicolor’s global reach proved central for a project of this scope because the company is one of the only entities in the world that could provide the precise combination of services in different categories that the project needed.  The sophisticated technological infrastructure and flexibility to rapidly upgrade and alter pipelines as needed, the award-winning artists with pre-existing relationships with these particular filmmakers, and the well-honed global collaboration techniques allowed Technicolor’s various entities and artists to all share data and communicate in real-time with filmmakers spread out across two continents.

MPC (one of Technicolor’s theatrical visual effects studios) was asked to virtually create the entire cast of the movie outside of Mowgli, the film’s protagonist, and the film’s digital primates—more than 50 different species, and many as leading or supporting characters, with crucial roles in Favreau’s narrative.

Visual effects supervisor Rob Legato on teaming up with Technicolor and MPC for the film.

“People have done some of this kind of work for years," noted multiple Oscar-winner Rob Legato, "but The Jungle Book allowed MPC, which previously had not been known for focusing on animals, to show what they are capable of in terms of photo-real work, and they upped their game. Now, they are at the highest level for this kind of thing.”

“In fact, there were a few shots they sent me that I found it hard to believe there was no [live-action photography] in the background shot.  It was magnificent, and it fooled me, even though I knew what they were doing. To me, that is a whole new level of realism.”

Meanwhile, Technicolor’s color science and color grading work, and finishing services, were central to pulling off The Jungle Book illusion.  Technicolor’s team of finishing artists, including Steve Scott, Mike Sowa and Charles Bunnag, used Autodesk’s Lustre Premium 2016 color-grading system for the project. While Scott personally graded the 2D version of the movie, Sowa collaborated with him to seamlessly grade and incorporate additional visual effects into each reel. Sowa was also responsible for grading the work for the various 3D and large format versions of the film, including IMAX, Barco, Cinemark, and Dolby, etc.  These EDR versions of the movie were necessitated to meet the unique needs of those specific theatrical formats.  Additional finishing work included Technicolor senior conform editor Bob Schneider’s efforts, while the company’s Marketing Services department deployed colorist Adam Nazarenko and producer Ellen Wang to ensure that four domestic and fourteen international trailers were presented correctly, along with a Super Bowl spot and a theme park piece.

In a recent interview, Legato sang Technicolor’s praises, “Technicolor has (over the years) changed pretty much as I thought they would, which is to stay at the forefront of whatever technology and absorbing it because I think that’s the nature of the company itself.”

While speaking of the myriad of new delivery projection standards that have come on-line over recent months, Legato noted, “Technicolor itself is a technical innovation of how things are normally done and they’re always at the forefront…always wanting to embrace something that hasn’t been done before.  And now working with them again on this particular film they were the same way.  There was never any hesitation.”