Mary Poppins Returns in a Whirlwind of Color and Animation 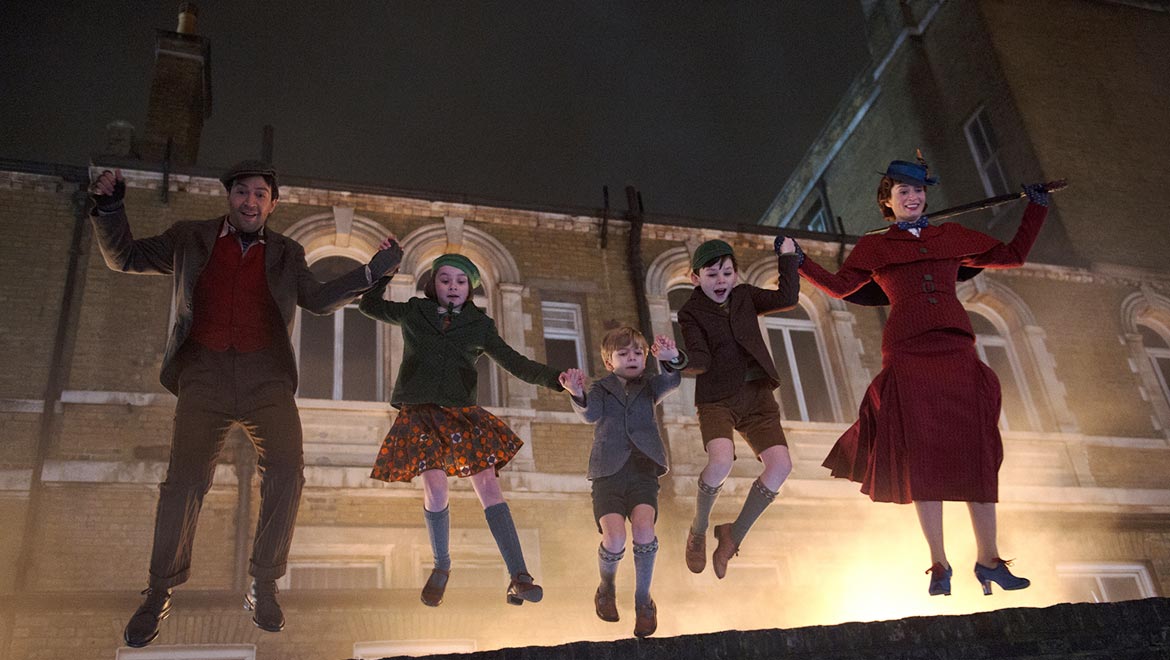 Mary Poppins Returns, director Rob Marshall’s follow-up to the beloved 1964 Disney classic Mary Poppins, flies into theaters just in time for the holiday season. The film focuses on the return of the charming nanny (now played by Emily Blunt), who comes to care for the next generation of Banks children after the now-adult Michael and Jane – for whom Mary Poppins cared for in the original film – suffer a personal loss. Enlisting her friend Jack (Lin-Manuel Miranda) – and her own unique brand of magic that can turn ordinary tasks into extraordinary adventures – our heroine enables the family to feel the wonder of life again.

As with the original, Technicolor was enlisted to bring its magic touch to the screen, this time through color-finishing by supervising digital colorist Michael Hatzer and his team. Hatzer worked before with Rob Marshall and cinematographer Dion Beebe on the color design for Into the Woods, and with Beebe on a number of other features. On Mary Poppins Returns, Hatzer and team began color grading and design during early test shoots for lenses and costumes, all while the workflow and color transforms were finalized for dailies and visual effects. All of these aspects taken together represented a color bible that Marshall, Beebe, and the rest of the production team would use on the feature.

A mix of old and new enabled the team to create a truly original look, while still paying homage to the 1964 original. While iconic elements like the City of London, the Banks’ house, and Cherry Tree Lane were recreated with a nod to the earlier film, all of the new locations and story elements introduced in Mary Poppins Returns required the creation of their own unique looks.

Asked how the team approached the many musical scenes and animated elements in the feature, Hatzer explains, “Rob and Dion took great care in the creation of the lighting design for each sequence, that we enhanced to complement what was captured on-set. For instance, in the amber gas lamps contrasting with the deep cyan blue wash in the ‘Trip the Light Fantastic’ dance scene, all while preserving the visibility and clarity of the actors and their costumes.”

The film was shot on ARRI Alexa SXT and Alexa MINI at Shepperton Studios outside of London. The LA-based post-production team is well-positioned to service projects based abroad, having worked on many UK-based productions where they’ve spent time on-set with filmmakers, in addition to numerous remote color sessions from Hollywood.

Hatzer worked extensively with Smith, who was critical in architecting the color design of the elaborate 2D animation sequences and hand-painted graphics throughout the movie. The entire film relied on large numbers of layered mattes and articulated roto completed by his team in Los Angeles, including Jason Myres and Gray Marshall. Hatzer’s long-time second colorist Chris Jensen worked hand-in-hand with color scientist Josh Pines to create the workflow, and was responsible for all visual effects pre-grading, as well as overseeing the final deliveries for the film: 2K SDR, 2K DolbyVision EDR, and IMAX Theatrical versions, plus UHD HDR Blu-ray, HD Blu-ray, and DVD for home delivery.

In addition to the color-finishing on the film, Hatzer and his team, as well as Technicolor’s Marketing Services group were heavily involved in the promotion of the film. Together, they created over five domestic and international trailers and nearly 200 TV spots, including multiple domestic and foreign language featurettes and a 30-minute special.

Concludes Hatzer, “I truly enjoyed the opportunity to work with the incredible Rob Marshall on his dazzling new installment of such an iconic Disney franchise.”