This retelling of a favorite yuletide story transports the audience to fantastical worlds in a visually-stunning, VFX-filled treat for the whole family. 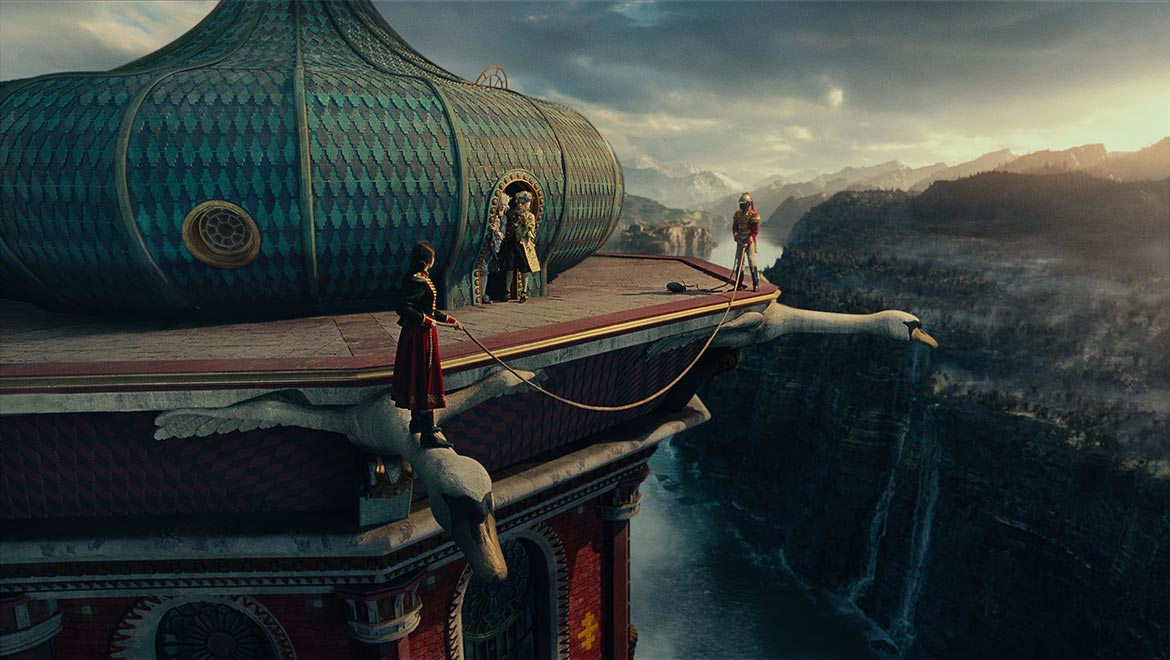 Disney’s newest holiday feature is an adaptation of the classic tale “The Nutcracker and the Mouse King” by E.T.A. Hoffmann. Transported to a magical and mysterious parallel world, young Clara (Mackenzie Foy) encounters toy soldiers, an army of mice, and the regents who preside over the Land of Snowflakes, Land of Flowers, and Land of Sweets – before braving the ominous Fourth Realm and the tyrannical Mother Ginger (Helen Mirren).

As lead vendor on the holiday extravaganza, MPC Film did 1000 of the feature’s 1150 shots. The huge amount of visual effects ranged from main characters to environments, set extensions, and fully CG backgrounds – pretty much everything inside and outside the fantastical worlds of The Four Realms, including buildings and flowers, rivers and windmills, even the ground the characters walk on.

MPC's Max Wood – known for his work on Hollywood blockbusters such as Suicide Squad, The Hunger Games, and Harry Potter (for which he created Lord Voldemort’s serpent-like nose) – was production-side VFX Supervisor for the project, his first with Disney. Wood was involved early on in the pre-production stage, working with director Lasse Hallström (one of two along with Joe Johnston), DP Linus Sandgren (Oscar winner for La La Land), and production designer Guy Hendrix Dyas – as they decided how they were going to shoot the feature.

“Working directly with the art department at such an early stage, we’re able to see how we can make the production design work in terms of visual effects,” said Wood. “I worked closely with the art department’s 3D artist who was planning out the Palace and The Four Realms – to make sure everything matched to the real world. For example, we made sure mountains in the background were of proper scale, and that waterfalls were of the correct height for the water to come down like a real waterfall.”

But the biggest creative accomplishment was the Mouse King, a nine-foot tall creature made up of around 60,000 mice.

“You had to get the motion just right, the speed of the mice,” explained Wood. “They had to move fastest down by his feet, and slower the higher up his body they go, clinging to each other and climbing over each other with great physicality as they start to form his shape. We wanted him to look real, but also special, because he’s a concept more than a character. So, he could be different in every shot, his silhouette could change, his shape could change.”

Technicolor VFX had a dedicated artist team working on The Nutcracker, completing nearly 250 shots under the leadership of Senior VFX Producer Alex Knudsen, whose extensive feature work includes The Revenant, The Post, and Rules Don’t Apply.

The team, known for character enhancement and digital makeup, applied their expertise to some of the feature’s most memorable, not-quite-human characters. These included Keira Knightley’s Sugar Plum Fairy – essentially a doll that comes to life – and Shiver (Richard E. Grant), with his icicles for fingers. With the number of shots they worked on, character consistency was especially important to the team as they went from daytime to nighttime scenes, exterior to interior shots, etc.

“Outside of the MCU, this is one of the biggest features we’ve had the opportunity to work on most recently in terms of visual effects,” said Knudsen. “It was also unique in that it was shot on film, an opportunity that you don’t get often anymore. We had a lot of creative input, and then a lot of first-look approvals from the filmmakers. Overall, it was the best of all worlds: the chance to bond with a tight-knit team, doing a large amount of work, for a big Disney feature, on a classic holiday story that audiences know and love.”