Rolling In “The Deep”: How Compelling Characters and Strong Storytelling Create a Brand for an Adventurous Age Group 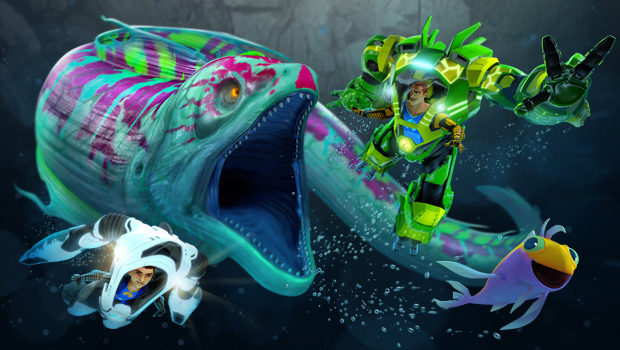 In 2013, Technicolor acquired the rights for The Deep, a series of graphic novels for kids. The 24 animated episodes produced by Technicolor and our production partners have become an international hit.

The Deep has been very successful and has just been picked up for a second season. It’s big news. Can you explain why you think this project has been so well received? Alison, let’s start with you.

Warner: The Deep has been very well received by the broadcasting community because it filled a niche broadcasters did not think existed at the time. Over the last few years, there has been a plethora of projects focused primarily on comedy, on action, and on preschool programing, but there has not been very much of what I would call ‘pure joyous adventure’ in the marketplace.

That caused broadcasters to be reluctant about getting involved with The Deep at an early stage. However, we were very lucky we had some very responsive broadcasters. In particular, Super RTL in Germany listened to what we had to say and saw how excited we were about The Deep. They bought into it at a very early stage, along with some of the Scandinavian broadcasters: Yle in Finland, SVT in Sweden, NRK in Norway and Ketnet in Belgium.

They all bought into the promise we would deliver something very special and they are now reaping the rewards. They are broadcasting The Deep and seeing the response from children. We are getting amazing feedback, and our distributors, DHX Media, are seeing sales start to happen globally.

Steven, what do you think it was about the brief that caused broadcasters to consider moving into the storytelling-based programing that is characterized by The Deep?

Wendland:  Ultimately, we delivered on the promise of a big adventure series for kids. We talked about The Deep as being Star Trek underwater. It’s not something that is taking place in outer space or in some mythical land. This is something that is taking place in our oceans, here on earth. There is an obvious thrill for kids watching the series and I think they immediately connect vicariously when they start watching.

Alison, what does this tell us about the relationship between strong characters, strong storytelling and the creation of strong brands?

Warner: If you want a strong brand, you have to build a strong foundation. Sometimes content creators shortchange their viewers. They think if they create a show with some really amazing machinery, kids will come and buy into the machinery, the premise, and the show.

By contrast, I think The Deep has a fantastic - and very human - role model in Ant (Antaeus Nekton), our 12-year-old hero. I think children of all ages completely relate to him. Our research also shows girls associate themselves with the Fontaine Nekton character as well.

There is lot of ‘that could be me’ going on with boys and girls watching the show. So even though the situations are amazing, there is a sense of believability and reality in The Deep, making it possible for viewers to want to experience more outside of watching a program. This is where we start extending and building a brand so that they can continue to expand on the experience.

Without those strong foundations – which are built through strong storytelling and compelling characters – the whole thing crumbles.

So, Steven, what are the next steps The Deep can take to strengthen its brand and deliver value to the overall community of interest: broadcasters, audiences, and the entire value chain?

Wendland:  We are at the stage in the evolution of The Deep where the audience is craving additional experiences. We are looking at how we can continue to feed content and engage the audience between programs, after they have watched all the available content.

The challenge in my mind is both  creative and strategic. We need to ensure there are enough long play experiences out there to satisfy the audience and sustain the brand. Toys, games, and books are obvious, but they are not the only avenues. We are looking beyond these and thinking about how new technologies might help to drive the brand.

The show’s themes include new and emerging technologies, so they seem like a natural fit to engage our viewers outside the show.

Steven, you mentioned new technologies. Are we talking about things like virtual reality and its application to The Deep’s brand?

Wendland: VR is obviously a prominent topic right now in the marketplace, but I am actually thinking about lots of different opportunities, some we are looking into now, others are farther down the track.

One of the interesting things about working at Technicolor is that we are in a privileged position in the creative development process. We can see all the different applications going on at Technicolor in VR, where we have a big research and development effort underway.

There is a VR division at Technicolor that is doing some amazingly cool stuff and we definitely have plans to build something together, but those are in their early stages.

There are a number of other business units at Technicolor working on immersive media projects. I love engaging with these teams to see what they are working on, what kind of technologies are brewing, and what interesting things they are doing. It offers an opportunity to look at how we might partner with them in ways maybe none of us had thought of, and come up with something really compelling.

When you can take a technology and combine it with a powerful narrative experience, the results are amazing.

Alison, what are the opportunities for Technicolor? How does this continue to grow the business you are building with Steven and the team?

Warner:  The original brief we had in the Technicolor IP Division was to build dynamic content using the various divisions within Technicolor, but also to start creating self-sustaining brands.

The Deep is our first project out of the gate and it is showing every indication of achieving that. There are so many future opportunities in new technologies where Technicolor is at the forefront. Hopefully The Deep will stand on its own as a brand with significant value in the marketplace, and we will achieve the same with other projects that will follow.

Wendland:  Building a brand involves much more than creating an appealing show or even making a hit show, as The Deep seems on track to become. It involves developing the brand details early on, and we gave this a lot of thought and consideration.

There are many things you might not normally think of until you are further down the road. For example, how you use the logo within the series? You want your brand to be recognizable, but kids tend to see through contrivances. So you cannot just slap your logo onto the title sequences. The logo we chose is very simple, very clear, and perfectly communicates the essence of the show without a single piece of text. We looked for natural ways to build that into the design of the show, and we even built it into the story lines in a very natural and seamless way.

Now, I believe the logo is inextricably linked to The Deep series. So when it comes time to extend the brand beyond the media content, the logo will have tremendous power, and will function as a trigger to the kind of content the audience loves.