Superhero Antics Explode Off the Screen in Thor: Ragnarok

Technicolor returns to the Marvel Universe in a film that honors the bold colorful look created by Jack Kirby, the original comic book artist behind the mighty Thor. 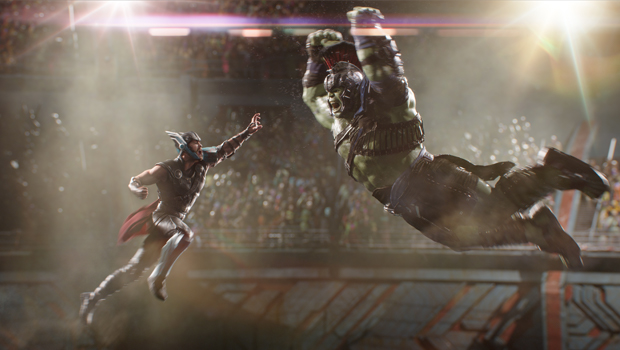 Thor: Ragnarok makes a bold, colorful, and explosive leap into the Marvel Cinematic Universe – thanks to the inspiration of Jack Kirby, the artist who first brought Thor to vivid life in the comic book pages. As Thor battles his adversaries and fights to save his homeland, the Technicolor team working on the film faced their own epic undertaking: translating Kirby’s art and design influence – felt throughout the MCU – for one of Marvel’s biggest superhero franchises.

Leading the team was Technicolor Supervising Finishing Artist Steve Scott, who established the look for the film and completed the 2D SDR master grade in Autodesk. Technicolor Colorist Charles Bunnag, who assisted Scott in addition to pre-grading and the 3D grade, described the look they were going for: “This film is an action comedy, which informed the entire color palette. We moved away from dark, somber, and serious into the fun, colorful look created by Jack Kirby, the original comic book artist behind Thor. This film really honors those roots.”

Bunnag also recounted working with the film’s director: “Taika Waititi’s main focus is story and character. He has a real knack for emotions and supporting the arc of the narrative. We were always asking, ‘How can lighting and color service the story?’”

That task went to Scott, Bunnag, and the rest of the Technicolor team, which included DI Producers Mike Dillon and Laura Holeman, Colorist Adam Nazarenko – who completed the 2D and 3D HDR grades for the film – and supporting Colorists Gray Marshal and Dave Franks. Colorists Jason Fabbro and Tashi Trieu handled the home video grades.

Watch the official trailer from Marvel Entertainment with Chris Hemsworth as the mighty Thor leading a star-studded cast.