Technicolor Brings Color and VFX to Netflix “Traumedy” Dead to Me

Netflix’s new series goes for a different look than a traditional comedy – a more filmic look that evolves deeper with each episode. 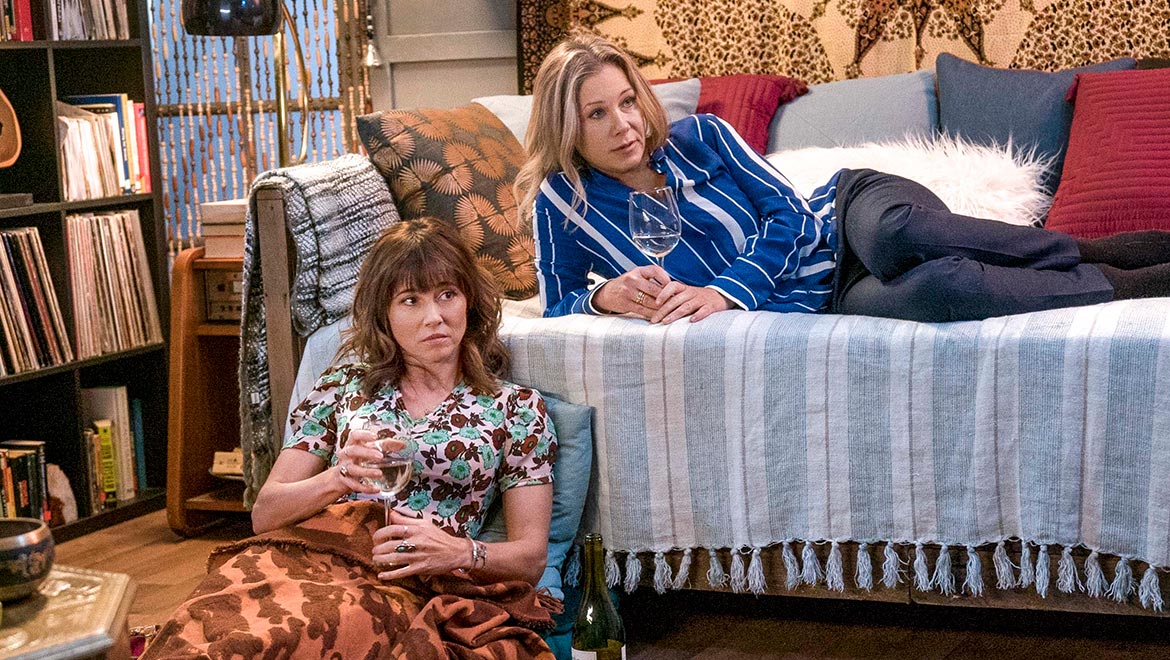 Misery loves company in the new Netflix dark comedy Dead to Me. Starring Christina Applegate and Linda Cardellini, Dead to Me follows the story of two women who bond over the recent loss of their husbands. The series is created by Liz Feldman, and executive produced by Applegate, alongside her fellow Anchorman alumni Adam McKay and Will Ferrell. Dead to Me is already being recognized as one of the top streaming series of 2019, with USA Today exclaiming that it is the “best binge watch of 2019.”

Technicolor worked to enhance the series across multiple services, including dailies, color-finishing, and visual effects. Technicolor’s On-Location Services team worked alongside series co-producer Peter Chomsky to discuss the show's specifications and what to expect shooting with Sony’s Venice 4k XOCN camera. From there, dailies colorist Chris Piper and the rest of the OLS team ensured the dailies were completed seamlessly.

Senior Colorist Tim Vincent was tapped to provide the color grade on the series. Prior to Dead to Me, Vincent had worked with series cinematographer Danny Moder and many of the producers on The Last Tycoon. Having that relationship already established enhanced the ease and collaboration on this new series. Both Liz Feldman and Moder took great care in every aspect of the project, even coming to Technicolor to review the grade on every episode.

When crafting the palette for Dead to Me, Vincent and the team looked at several dramatic films for inspiration. Vincent explains that the creators wanted a different look than a traditional comedy, so they opted for more of a filmic look that evolves deeper throughout the episodes. In addition to standard definition, the series was also graded in Dolby Vision. As Vincent explains, “We took advantage of HDR’s best and SDR’s best, so the show really shines in both formats.”

Technicolor VFX served as the primary visual effects vendor on the project. Having both the color and VFX teams together in one building truly facilitated the creation of a solid workflow and clear lines of communication. Vincent, along with the VFX team led by VFX supervisor Archie Donato and VFX producer Tara Acquesta, were constantly working together to review the grade, which expedited VFX when making any needed revisions.

Over the course of the 10-episode series, Technicolor VFX contributed to 400+ shots. Explains Donato, “It was a treat to VFX supervise a show with an incredible crew and effects that served the storytelling to perfection.” Acquesta elaborates, “It was a pleasure to work on a show that is clearly so special, and to know that we’ve touched every VFX shot on this show makes it even more exciting.”

“We knew it was going to be a successful show from the get-go,” explains Vincent. “All the elements are there, and I truly feel that this series has staying power and could be on for many seasons to come.”

Get a taste of what’s to come on Dead to Me by watching the trailer HERE – and tune in to the series, now streaming on Netflix.