Technicolor’s Atomic Puppet Is Set To Air On Disney XD In The US, UK, & Spain

Get ready for superheroics, adventures, and fun with Atomic Puppet this summer! 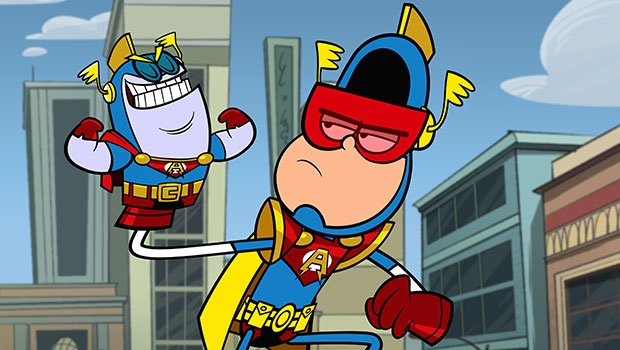 Atomic Puppet, Technicolor’s 2D animated original comedy series, is set to air on Disney XD in the US, UK, and Spain beginning this June. Atomic Puppet premiered a sneak peek on Disney XD’s US station with two back-to-back 11-minute episodes airing on May 30th, and will continue airing in July.

The family-friendly show initially premiered in March on Disney XD France. In addition to upcoming airdates in the UK, Spain, and the US, the series will continue to roll out in European, Asian, and Australian markets throughout the remainder of 2016 and early 2017. The fantastic news follows that ofThe Deep, another original property by Technicolor, which became available for streaming on Netflix in the US beginning June 1.

Atomic Puppet follows 12-year-old Joey Felt, a super-fan of superhero Captain Atomic. When Captain Atomic is transformed into a powerless puppet by his disgruntled sidekick, he soon realizes that the only way to gain back his former powers is to team up with Joey, which is both the worst thing that could happen to a superhero, and the best thing that could happen to a 12-year old boy. Together, the two form an awkward and comedic partnership as Mega City’s newest superhero duo, Atomic Puppet.

The original concept for Atomic Puppet was created by animated television writer Mark Drop and writer/creator Jerry Leibowitz. In Canada, the series is developed by John Derevlany and Brad Birch, while being overseen by Mercury Filmworks’ Director of Development Travis Williams, as well as the Technicolor Creative Development team. In France, Technicolor is working with Thierry Rivard to lead the co-production on behalf of Technicolor while development in France is led by Gaumont Animation.

Be sure to tune in to Atomic Puppet this summer, and stay tuned as additional global airdates will be announced soon!