Airing on HBO and Sky One, the new show from the Veep creator required the team to deliver multiple looks and high-volume, cinematic level visual effects. 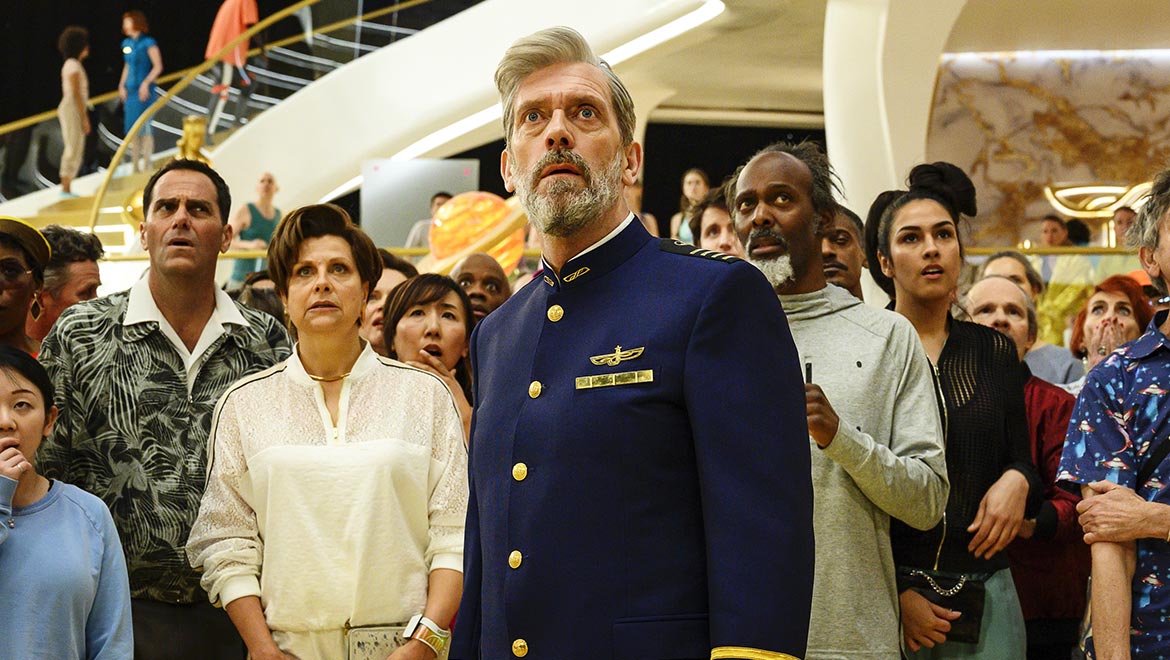 Armando Iannucci’s sci-fi adventure series Avenue 5, shot by cinematographer Eben Bolter, BSC, takes you on a ‘vacation you never knew you needed’ – and Technicolor is delighted to be a part of the journey.

Senior Colorist Dan Coles provided the full grade in both SDR and HDR, and Nick Bennett, VFX Supervisor for Technicolor VFX – Technicolor’s boutique visual effects studio – oversaw the delivery of hundreds of 2D and CG shots from their London and Toronto locations.

“Embarking on a large-scale Armando Iannucci multi-camera comedy show in a spaceship-sized set, with a thousand-strong cast, and with fully integrated lighting, offered a unique opportunity for Eben to do something exciting and different,” said Coles.

“I had a great time working with Dan and his team at Technicolor in London on Avenue 5,” said Bolter. “I was initially interested in a bolder, warmer and more cinematic look than is usually associated with comedy and Dan really got behind this idea, developing a look I was really happy with for the creation of our on-set LUT and in the final timing subtleties. The ability to grade our Dolby Vision HDR with the SDR side by side was also tremendously useful.”

Developing three different looks – and a seamless connection between them

There are three main looks to give the audience a visual shortcut as to where they are and what the atmosphere is. “The first is in space at the front of the ship – rich, luxurious, and opulent,” explained Coles. “The second is the back of the ship which has a grungier look and in lighting terms was more industrial with hard sources. The third look is Earth around forty years in the future, and this had a more naturalistic feel. In terms of the grade we enhanced the three different worlds and created a seamlessness across the multi-camera footage. We essentially embraced the bold filmic image – keeping it all rich in contrast and color but in a naturalistic style.”

Developing a LUT for the series was integral to the color pipeline and final deliverable to HBO and Sky One, and Coles was involved in early discussions about lighting, lenses, set design, locations, costume, makeup and the overall look that the filmmakers wanted to achieve.

“We looked at several cinematic references during this process,” said Coles. “With all this in mind, we set about creating a specific LUT to use on set and in the dailies pipeline. The LUT that resulted from this gave Eben a very pleasing starting point from which to view his material.”

Integrated lighting (using 5km of RGB+WW LED strip) was built into the sets at Leavesden Studio and used in conjunction with Sky Panels above the set where Bolter could hide them.

“All the lighting was controlled remotely from an iPad,” continued Coles. “Everything was LED and completely color- and level-dimmable – and so with this high degree of control achievable in the on-set lighting, the show LUT was all that was used in the dailies color pipeline. When it came to the final grade our timeline was an exact match of the offline grade, which gave us the perfect starting point in the grade too.”

Delivering and integrating hundreds of shots for the VFX-intensive show

Another key consideration for the grade was to seamlessly integrate the vast amount of VFX in the show, which included multiple shots delivered by Technicolor VFX. As one of the primary vendors for the series,  they delivered close to 1,000 shots of 2D and CG VFX from their offices in London and Toronto.

“We were first introduced to the series back in August 2018, when we received a first draft of the script,” said Technicolor VFX Executive Producer Kate Warburton. “It was clear from early on that the show required a significant amount of VFX work, and we were delighted to be working alongside the Technicolor postproduction team to deliver a seamless end-to-end customer experience for HBO.”

Such a heavy VFX show also created an opportunity for the client to utilize Technicolor PULSE, a web-based asset management platform that streamlines and automates file management, whether it’s getting files from set to vendors or colleagues in other departments. All VFX vendors on the show were given unlimited, 24/7 access to VFX pulls within PULSE.

Simon Frame, VFX Supervisor for Avenue 5, managed the VFX workflow for all vendors on the show, and particularly enjoyed the integrated post-production solution offered by Technicolor on the project.

“Technicolor VFX was my absolute first choice as a key vendor on Avenue 5,” said Frame. “This was not just because they were the post house finishing the whole show, but because of my excellent experiences on BAFTA nominated shows with them. Their recent development of PULSE has been a crucial game changer in VFX production on large scale productions and shows their commitment to succeed in this genre of VFX shows.

“Over the many years I have worked with the team in London they have developed into a world class operation, exhibiting excellence on every level, creatively and in production. They go the extra mile every time, accommodating every last request, and it is a constant pleasure to work with them.”

One of the main creative objectives for episode one was to create a star scape for the hundreds of windows dotted around the ship. “Getting the stars to look believable has been a fun and creative challenge,” said Bennett.

“I’ve been watching lots of space movies recently in preparation for the show – they all do stars differently. Setting a consistent and believable look for the star-studded view out of the windows was an important creative milestone for the series.”

Another creative consideration for episode one was to design a look for the Mission Control video conferencing scene in the boardroom, where the crew find out their voyage has been knocked off course.

“We were given the raw footage and created a digital treatment,” said Bennett. “We used techniques such as adding scan lines, chromatic aberrations and interference patterns to create a futuristic communications experience.”

Watch Avenue 5 on HBO and Sky One.