Technicolor Wins Best Sound For The Book Of Negroes 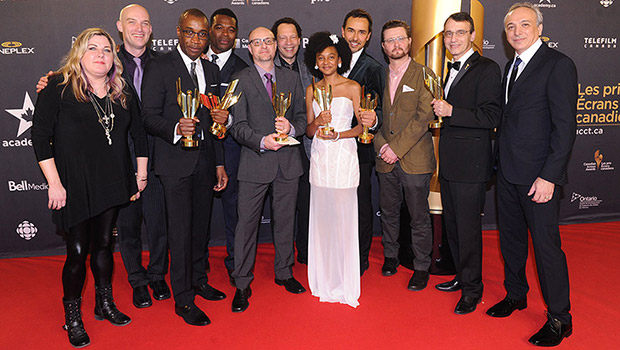 The Book of Negroes took home eleven trophies at the 2016 Canadian Screen Awards, including best-limited series and best direction in a dramatic program or limited series for Clement Virgo.  The six-part miniseries based on the novel by Canadian author Lawrence Hill, follows Aminata Diallo’s (Aunjanue Ellis) extraordinary life.  Kidnapped by slave traders in West Africa and subsequently enslaved in South Carolina, Aminata must navigate her way through the treacherous jungles of Sierra Leone, the American Revolution in New York, and the isolated refuge of Nova Scotia before ultimately securing her freedom in England at the dawn of the 19th century.

Technicolor Toronto worked closely with director Clement Virgo and executive producer, Damon D’Oliveira for over a year on the project, starting with pre-production and continuing with post.  Technicolor completed the post process, including managing the dailies shot in South Africa, coming back to Technicolor for processing and delivery to editorial at the Toronto facility, color finishing, VFX, sound mixing, and deliverables. The VFX team delivered more than 300 VFX shots for the miniseries, including digital matte paintings, green screen compositing, and the removal of non-period landmarks.  Being involved from pre-production allowed the team to develop creative VFX solutions that were both cost effective and worked within a period piece.

Technicolor along with Tattersall Sound received the Canadian Screen Award for Best Sound in a Comedy or Dramatic Program or Series for their incredible work on The Book of Negroes.

The sound team who worked on the project is thrilled by the win. Lead re-recording mixer, Frank Morrone explains, “Working with Clement and Damon was so rewarding. I was inspired by the script crafted by Clement and Lawrence Hill. Clement and I were immediately in sync on what creative direction the mix should take to best serve the story. This along with Clement’s masterful direction, the locations, and the period in which the story took place gave us great opportunities to be creative. Our team at Technicolor delivered a world class product every step of the way and provided us with the tools and support to make the technology transparent and allowed us to focus on being creative. I am so happy to have been a part of such a powerful story.”

The Book of Negroes was produced by Conquering Lion Pictures, Out of Africa Entertainment, eOne, and Idlewild Films.