Technicolor’s The Mill also collaborated with the filmmakers on an Augmented Reality app – a groundbreaking use of emerging technology to market a feature. 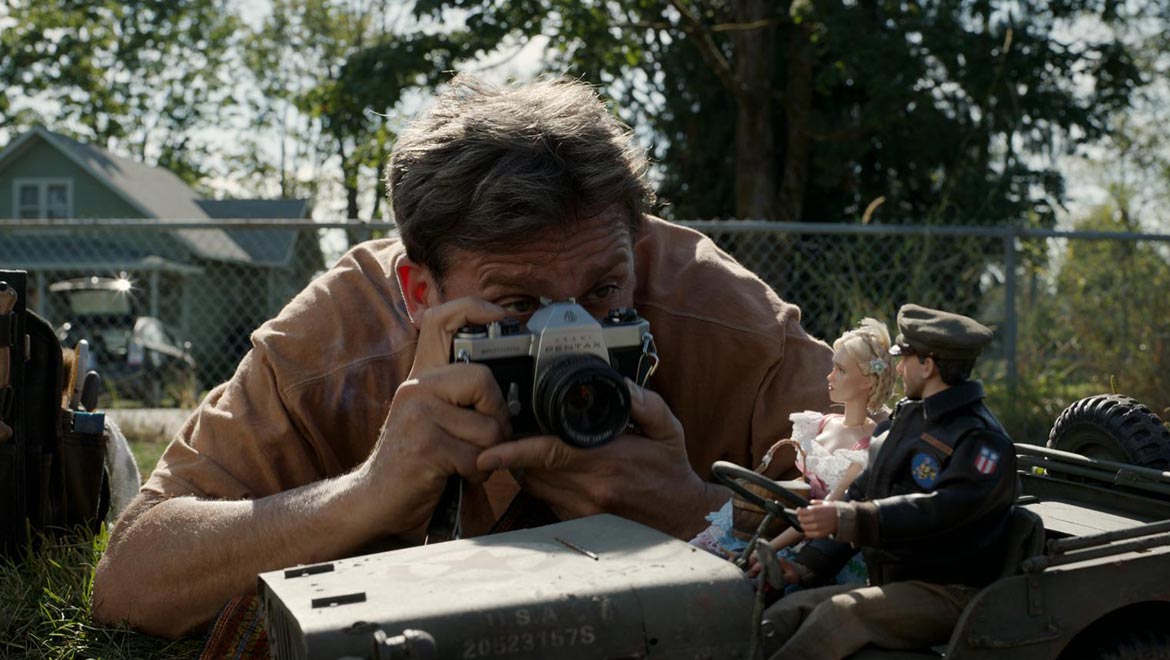 Welcome to Marwen is the latest feature from the innovative and Oscar-winning filmmaker Robert Zemeckis. Starring Steve Carell, the film is based on the astonishing true story of Mark Hogancamp, an illustrator who, after surviving a vicious assault, begins a unique healing process through his own art and imagination.

The feature brought together cinematographer C. Kim Miles, CSC, with Technicolor Senior Colorist Maxine Gervais, and for both, it was a first time working on a Zemeckis picture.

Kim: “If I were to pick any director to work with in Hollywood, it would be Bob Zemeckis. So it was surreal to get a call from his long-time producer Steve Starkey asking me if I’d be interested in working on this picture. It was a happy coincidence that all came about because Bob had noticed my work on Warner Bros. The Flash, which happened to be his kids’ favorite show.”

In Welcome to Marwen, the look of the feature is split between two distinct worlds: Hogancamp’s “real world” and the one of his imagination, which the filmmakers referred to as “doll world”.

Technicolor Senior Colorist Maxine Gervais was involved right from the start, collaborating with Kim in pre-production on the best approach to creating these two worlds, in a way that there was seamless navigation between them. Knowing how the workflow unfolds after filming, Kim wanted to make sure the looks they came up with on-set were solid enough to run through the entire process – from pre- to post-production.

Maxine: “The idea was to establish different looks for the two worlds, even for the dailies. Kim came up with distinct but subtle ways of doing that, that felt natural and not overly stylized. This approach facilitated the dailies and VFX work, and then we could push the envelope a little bit more when we got to color finishing – when the movie was more put together and we could really tell what worked or didn’t work, and where we wanted to go with it.”

Kim: “Maxine and I shot some tests and then applied a base LUT for “real world” and a base LUT for “doll world”. Maxine could then sync up with these later in post when she was doing the fine-tuning and color finishing. Right from the top, Maxine was so helpful that, if I had my way, I would never want to do another project without her.”

In “real world”, Kim strove for honesty in photographing Mark’s story and its characters, creating the look of natural light for scenes shot mostly on a soundstage, and taking other cues from the documentary about Hogancamp, Marwencol.

Kim: “Mark's real world is somewhat bleak, following the beating and his slow path to recovery. So we made those scenes less saturated, with less contrast and more rawness, than the ones in the “doll world” of his imagination. But when you shoot everything on a stage and you control the lighting, you don’t want images that start to look too perfect, and thus less honest. So we went to great lengths to create a sense of chaos in the lighting – for example, by introducing a streak of sunlight or an inconvenient shadow that made the environment look less controlled.”

Maxine: “The grim and grittier world Mark lives in just explodes with color when you get to doll world. It has a different texture to it, and it’s covered in saturated pastels that really pop, like a golden age of Hollywood Technicolor picture. Because of this you always know quickly which world you’re in, and it works very well for the narrative of the movie as a whole.”

For inspiration in creating the CG “doll world”, which was created by VFX supervisor Kevin Baillie and the VFX wizards at Atomic Fiction, the filmmakers turned to old Kodachrome images and the sense of nostalgia they convey. Looking to expand on what he accomplished with Polar Express, Zemeckis wanted to escape the Uncanny Valley [the emotional disconnect people often feel with close-but-not-quite human animated characters] and let the audience connect with CG characters in a way that's never been done before.

Kim: “Bob and his team concluded that computer generated eyes and mouths are the final barrier to making a truly believable CG character. So we physically lit and photographed the actors during the motion capture phase of production – and because we had defined the CG environment early on, including having formulated a plan as to how it would be lit, we were able to seamlessly glue their actual faces onto the CG dolls. In actuality, all we had to photograph – and light – were their eyes and mouths. Everything else in their faces is digital – and the result is beyond anything you can imagine.”

Reflecting on the experience as a whole, Welcome to Marwen seemed to be a welcome experience for all involved.

Kim: “With this team and people like Maxine, I felt profoundly supported. She has infinite patience and her instincts are always dead-on. So much so that we got only 2 or 3 notes on color finishing from the producers for the entire film – and a huge vote of confidence from both Bob and Steve Starkey.”

Maxine: “Even though it was my first time working with this team, it felt like an instant family. Everyone was both professional and passionate about what they do. They knew what they wanted, trusted us to do it, and were appreciative of what it took. Kim is a talented DP who’s also very humble, which is the greatest combination. It gives you extra wings to fly when you have a team like that behind you.”

Kim: “My biggest takeaway was the spiritual reaffirmation it had for me. The fantastic hope when you start in this business is that Hollywood is filled with storytellers and filmmakers who just want to collaborate together and pour their hearts and souls out onto the screen. This movie brought those feelings back, the passion – and the realization that the dream is real; that the people I’ve looked up to my entire life really do just want to create the best experience they possibly can for the audience – and this one defies any other storytelling that we’ve seen so far.”

For the dailies/OLS team at Technicolor, Welcome to Marwen was a huge project with the largest file format a production can shoot, Arri65. Though this made for a highly demanding workflow, it had to be handled efficiently, timely, and seamlessly.

Chris Van Duyn, VP Operations OLS: “Technicolor engineer Chris Armstrong was instrumental in the way the workflow was set-up for the extremely large amount of data we handled daily; and Chris Piper, who did the dailies, knocked it out of the park – not only making sure everything looked great but also managing the filmmakers’ needs extremely well and to their great satisfaction.”

Technicolor also had to accommodate a move during production, relocating the beefed-up system being used for dailies from their offices in Vancouver to a MoCap facility in Surrey – where they had to be up and running within a day or two.

Chris: “We were able to keep the process smooth and the archival to LTOs turned around promptly – always an enormous task with the kind of data payload that comes with Arri65. In spite of the demands of large amounts of data arriving daily and the challenges involved, we always met the 8AM deadline as expected on any production.”

The bond of trust that formed amongst the team grew to include VFX editor Alison Wolf, a long-time collaborator of Robert Zemeckis, who used Technicolor Pulse for VFX pulls on Welcome to Marwen. In total, Technicolor Pulse pulled 2,387,553 frames – with an average delivery time of just 2:37 minutes.

Alison: “Pulse is fantastic; it made the experience pretty seamless and Pulse support was excellent. It became part of our pipeline and an uninterrupted workflow, and the automated features made pulls as smooth, fast and effective as can be.”

Taking the feature even further into the groundbreaking territory is an Augmented Reality (AR) app that Technicolor’s The Mill co-created in partnership with Universal Pictures and Robert Zemeckis.

Executive Producer Aurelien Simon and the Emerging Technology team at The Mill in Los Angeles worked with Universal and Zemeckis to build the AR mobile device app, which transports users into the film via the first-of-its-kind 3-D digital recreation of a movie scene. Taking characters and locations from the movie, The Mill’s in-house creative technology team was able to build an interactive experience enabling users to immerse themselves in the world of Marwen.

Aurelien: “This impressive AR app drew upon numerous skill sets, tools, and software solutions – from planning and architecting the app, mapping interactivity, and reinterpreting the beautiful CGI assets from the movie for seamless real-time use.”

Users are greeted in the app by Zemeckis, a pioneer in using motion capture and other emerging technology to tell stories. Once inside the scene, users meet the characters and can explore the environment, snap a photograph and share on social as a digital postcard. Additional activities include character bios, photo galleries, behind-the-scenes content, and a Facebook filter created by The Mill.

Aurelien: “Given Robert Zemeckis’ inspiring history of revolutionary VFX innovations at the cinema, this project was the perfect opportunity to showcase a new approach to second screen content within the entertainment industry.”

Check out the AR app – a new level of marketing innovation that let users explore an exclusive scene before the feature released in theaters.