Technicolor Lets Conviction, Passion Shine on When We Rise

Post-production teams at Technicolor go into high gear for ABC’s sweeping account of the LGBT movement. 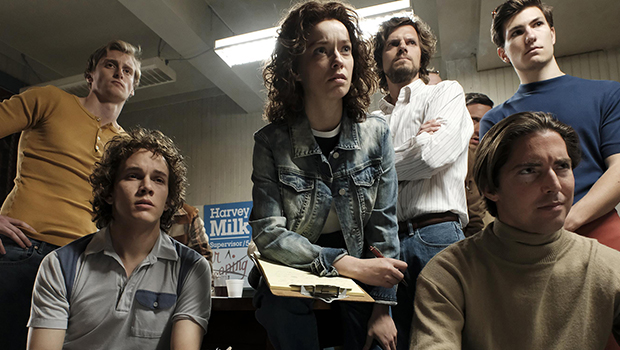 ABC’s new mini-series When We Rise, written and directed by Dustin Lance Black, is a stirring chronicle of the pioneers who advanced the LGBT community forward in terms of civil rights and equal justice. It covers an extensive period of time from the early days of the movement shortly after the Stonewall riots, to where we are today nearly half a century later.

As with many period productions, color and sound are often the basis for an authentic look and feel. Technicolor provided both of these key services on the production. According to Colorist Paul Allia, Black likes to convey feelings through color. That extended to the mood and the time period as it moved from the seventies closer to the present. “The time change is gradual and we try to give it a film look by doing soft corrections,” said Allia, “nothing harsh…that would attract attention or take away from the story.”

“We were very involved in the color choices, from early hair and make-up tests to the final color timed master,” added Mike Hatzer, Supervising Digital Colorist. “After Milk, it was great teaming up again with Gus Van Sant (who directed an episode) and Dustin for this incredibly important project.”

Supervising Sound Editor Brad North said that Black was present at all of their sound sessions, which is rare for a show runner. However, in this case, it made sense. According to Technicolor Supervising Sound Editor and Re-recording Mixer Andy Hay, Black had been at many of the actual rallies and court hearings depicted in the series, so he could relay to the team exactly how these events sounded. “The challenge and reward of the series,” said Hay, “was weaving these recreations of actual events into a broader narrative piece.”

In addition to color and sound services, visual effects were provided by a Technicolor team led by VFX Producer Rachel Hanson.

Watch the inspiring trailer for When We Rise below.