Technicolor’s ‘The Deep’ Will Be Streaming on Netflix This Summer 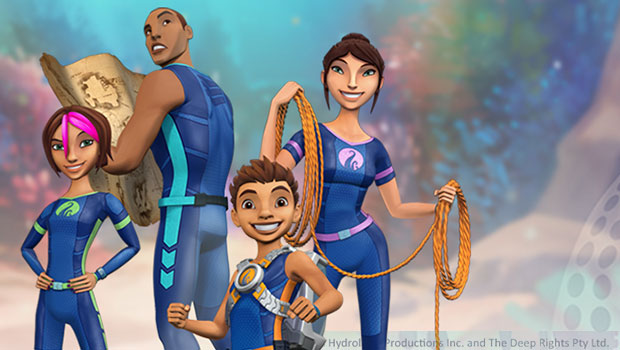 Technicolor’s CG-animated series The Deep has been picked up by Netflix, and the first season will be available for streaming in the US beginning June 1st.

The Deep follows the adventures of the Nekton family—a brilliant team of underwater explorers. With state-of-the-art technology and an unquenchable thirst for discovery, the Nektons explore the mysterious depths of the ocean, where most of our world lies unexplored and unexplained. While others look up to the stars, this family knows that an infinite number of things shine brightly in the darkness below.

Technicolor Creative Development, the arm of the Animation & Games division that is responsible for creating original content, has been steadily adding new intellectual properties to its development slate over the past three years. They are focused on developing quality children’s programming across all genres in animation—from preschool to comedy and action for kids and teens.

The series, which is geared toward children ages 6 – 12, debuted overseas in November 2015 and is currently scoring high ratings and glowing reviews on several top-rated networks including Australia’s Seven Network, Germany’s SuperRTL, the UK’s CBBC and Canada’s Family CHRGD.  It is also scheduled to debut on ABC 3 Australia, Ketnet in Belgium, NRK in Norway, SVT in Sweden and YLE in Finland in the coming months. The Deep’s ratings success overseas indicates that it will likely be picked up for a second season from the original broadcast partner, Australia’s ABC Network.