Technicolor celebrated its 100th anniversary with high honors from Hollywood and an afternoon of emerging technology exhibits. 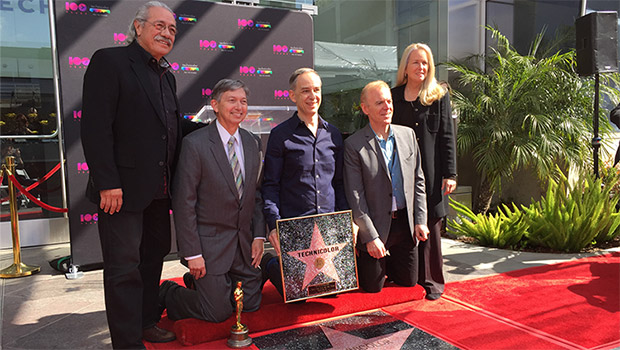 On March 30, 2016, Technicolor celebrated its centennial with true fanfare by receiving a Hollywood Star of Recognition at a special ceremony attended by celebrities and industry insiders. The ceremony took place on the historic Sunset and Gower lot where Hollywood Chamber of Commerce President-CEO Leron Gubler noted Technicolor’s historical achievements and its continued collaboration with the entertainment and media industries. Richard Crudo, President of the American Society of Cinematographers, offered some of his favorite Technicolor memories.  The ceremony concluded with Technicolor CEO Fred Rose who remarked on the company’s rich history and its continued commitment towards empowering storytellers.

Afterwards, guests were invited to try the latest emerging and new technologies inside Technicolor’s state-of-the-art facilities at its Hollywood headquarters. Experts were on hand to display Technicolor’s work with DNA Storage and virtual reality for interested ceremony attendees.

For additional information, be sure to read the Hollywood Star of Recognition announcement and the latest social media reactions to the event, or watch it right here (including a special appearance by renowned actor/director Edward James Olmos):