The new ITV/Amazon Studios drama Vanity Fair, adapted from the novel by William Makepeace Thackeray, takes viewers back to Victorian England to explore the lives of Becky Sharp, her friends and family during the Napoleonic Wars. 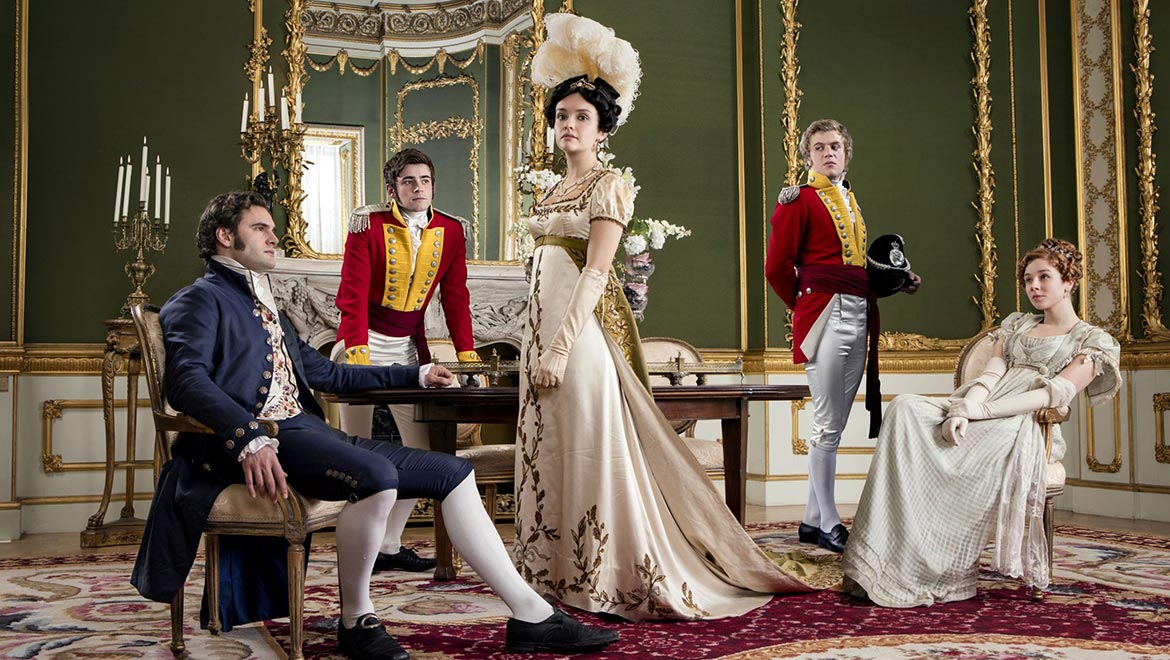 The Technicolor team got involved early during pre-production, with Senior Colorist Dan Coles collaborating with DP Ed Rutherford to discuss and plan for the shoot. They worked through camera selection, lenses, costumes, lighting, sets, locations, and production design – all informing the look they ultimately would create for Vanity Fair.  With both men deciding early on that they wanted richness in the on-screen images, color and contrast play a huge part in the aesthetic of the series.

“It’s fair to say that we wanted to move away from the more traditional period drama look to achieve something that feels newer and exciting; rich, vibrant and with a modern twist,” elaborates Coles. “However, Vanity Fair still has elements of darkness and moodiness – there are quite a few scenes in which darker and more muted colors work well and suit the narrative of the overall piece perfectly.”

The 19th century was painstakingly recreated on-screen, as off-screen the production utilized the latest technologies of this century to bring Vanity Fair to life. For example, they employed a variety of cameras, including GoPro, SteadiCam, and Drone footage, to bring a sense of scale to the series. The production also utilized Technicolor’s innovative content management system, Pulse, to deliver its VFX pulls to Technicolor London. Production shot on 12 camera formats and Pulse normalized each format before the shots were distributed.  This ensured that all media was delivered to Technicolor in a unified ACES color pipeline, allowing the VFX and color finishing teams to focus on the creative aspects of their roles.

As lead vendor, Technicolor London’s VFX team worked on more than 350 shots for Vanity Fair. Led by Creative Director Gary Brown, they worked with the production team on storyboards for big set pieces, including recreations of the Vauxhall Pleasure Gardens and the vast Battle of Waterloo – both of which required significant VFX work.

As Brown explains, “For the Battle of Waterloo, we did a large amount of soldier and horse replication, set extension matte painting, explosions and blood to hopefully create a sense of awe and wonder for viewers. We also recreated the iconic Vauxhall Pleasure Gardens from old photographs from its heyday, which required significant set extensions and the creation of a 3D hot air balloon.”

Drag arrow from left to right to see how Technicolor London VFX team recreated the Battle of Waterloo. 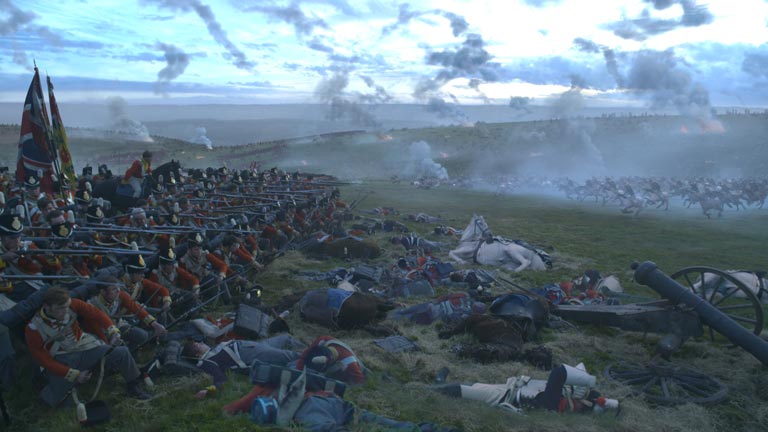 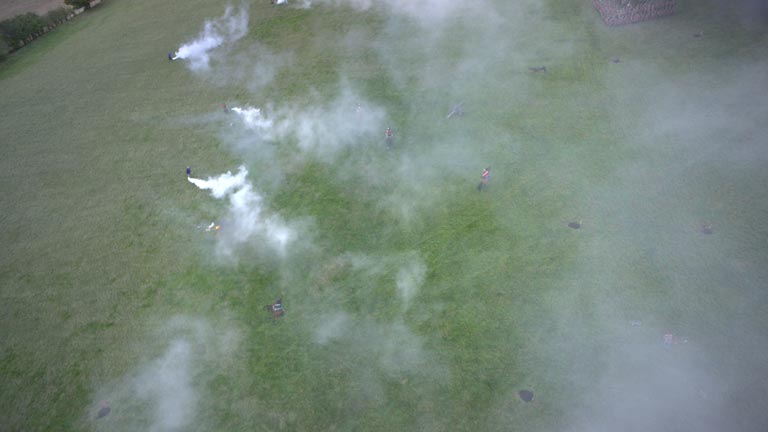 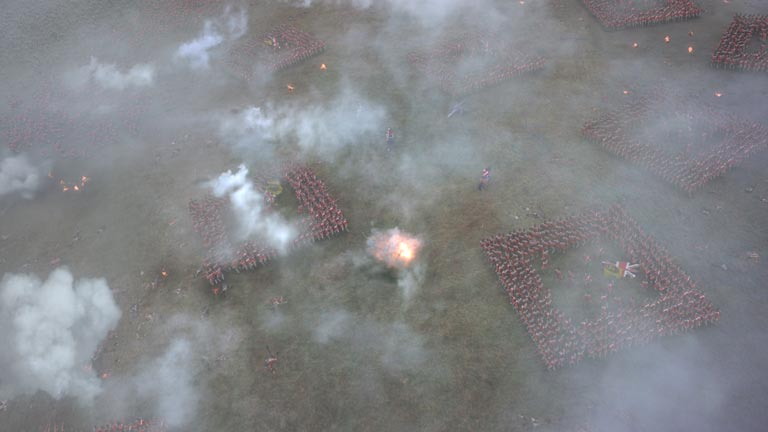 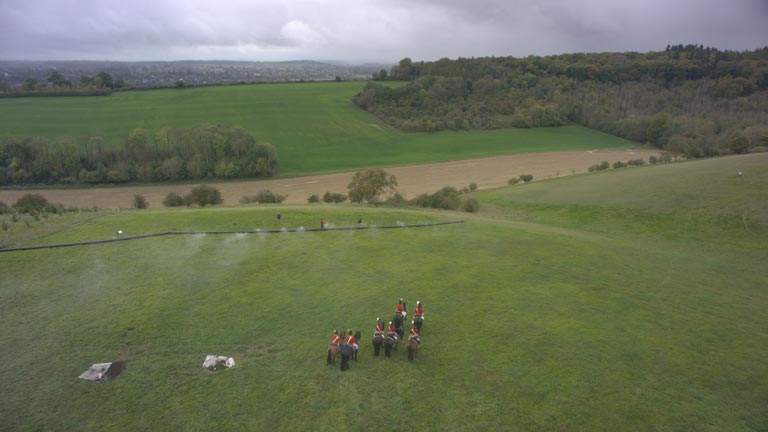 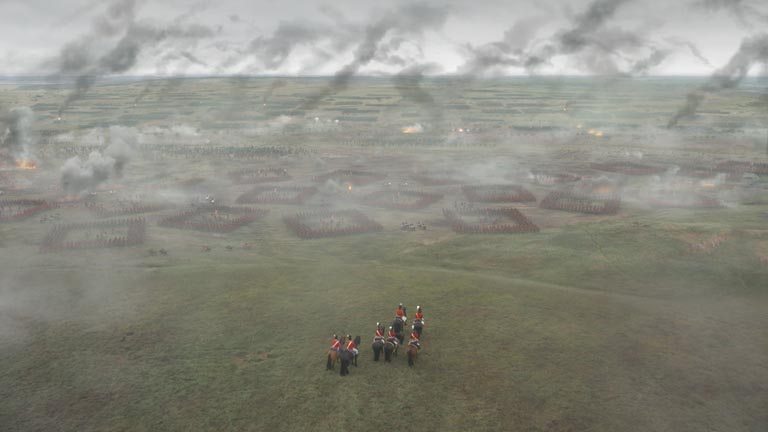 Both scenes used a roaming 360-degree SteadyCam, which played a major role in creating the look and feel. But it also meant the team couldn’t erect conventional green screens, requiring them to think outside of the box. As Brown recalls, “On one occasion, a green screen was crucial in the middle of one of these dynamic SteadyCam shots. In this instance, we got the crew crouching out of frame with a green screen collapsed on the floor. After the camera passed, they jumped into position and waited for the camera to pan back in their direction. You may get that ‘glance over-the-top of spectacles’ moment when you’re involved in pre-production meetings and suggest a renegade approach like this, but the production put their faith in us and it totally worked.”

The recreation of the Battle of Waterloo presented a unique challenge to Technicolor’s Sound team, also engaged on Vanity Fair. Gareth Bull, London’s Head of Sound, led the team in recreating the sounds of a battlefield in the 19th century. “With over 90,000 troops, the sheer scale and level of detail required from the sound to match the visuals was a monumental task,” says Bull. “It took a lot of time and precision to build up the sound layers and then a lot of brutal sound editing and shaping to keep the battle sounding fresh and detailed.”